(This post was published previously, on another blog I maintain. I imported it from that blog this July, which explains why it’s posted in the summer, but concerns wintertime activities.)

It’s winter 2018 — or the roller coaster that may pass this year for winter in Central Connecticut — with fits of warm weather, occasional low teens, minor snow or ice … but still a simmering risk of cabin fever. (Sometimes just knowing it’s winter is enough to keep a person bundled up indoors, busy on some type of puzzle or book or computer.)

I may not have mentioned — I now share a home with my parents. Just before Halloween, they left their own home of 50+ years and moved in with me. They live on the ground floor (easy for them to get around) and I live on the second floor, with two cats (IG: 2catsdriving; twitter: @2catsdriving) who really do not get along.

One of my winter goals is to make sure we keep somewhat busy, to avoid going stir-crazy. This winter we have been, among other places, to a warm and humid room filled with mostly tropical butterflies, and we have been to a museum that specializes in American art — from Colonial days to perhaps a few weeks ago. There may be another museum or two on our list this winter (including possibly the Mystic Seaport, which does not burrow like a chipmunk for the winter). But absolutely, we will visit the state’s Dinosaur State Park (right down the road from us) – actual dinosaur footprints under what looks to be a geodesic dome. Not much compares to communing with the ancients, or learning more about R. Buckminster Fuller – “Bucky” to his friends. 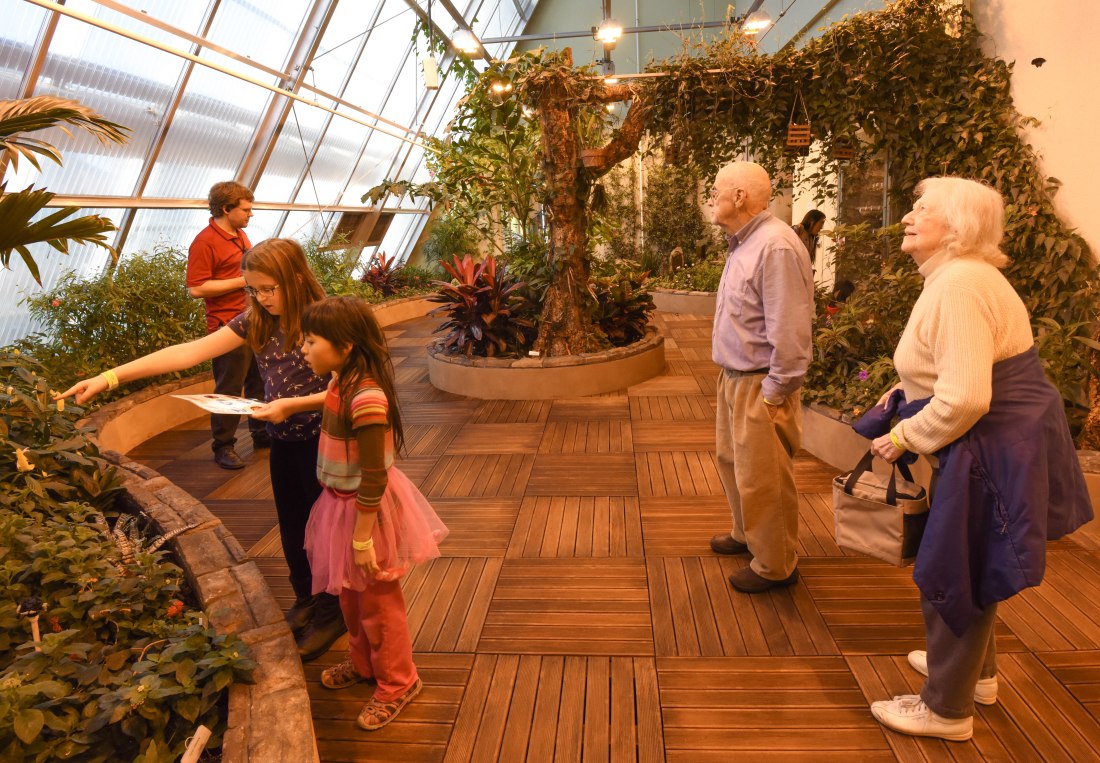 Of course, the butterflies need to come from somewhere. According to the scientists and assistants in the encounter room, every two weeks a new “crop” of pupa, or chrysalis (is the plural chrysales) arrives? They are set up in a kind of birthing room, where they ultimately emerge as the butterflies they are meant to be, and then are released into the humid, warm, sometimes peopled room. 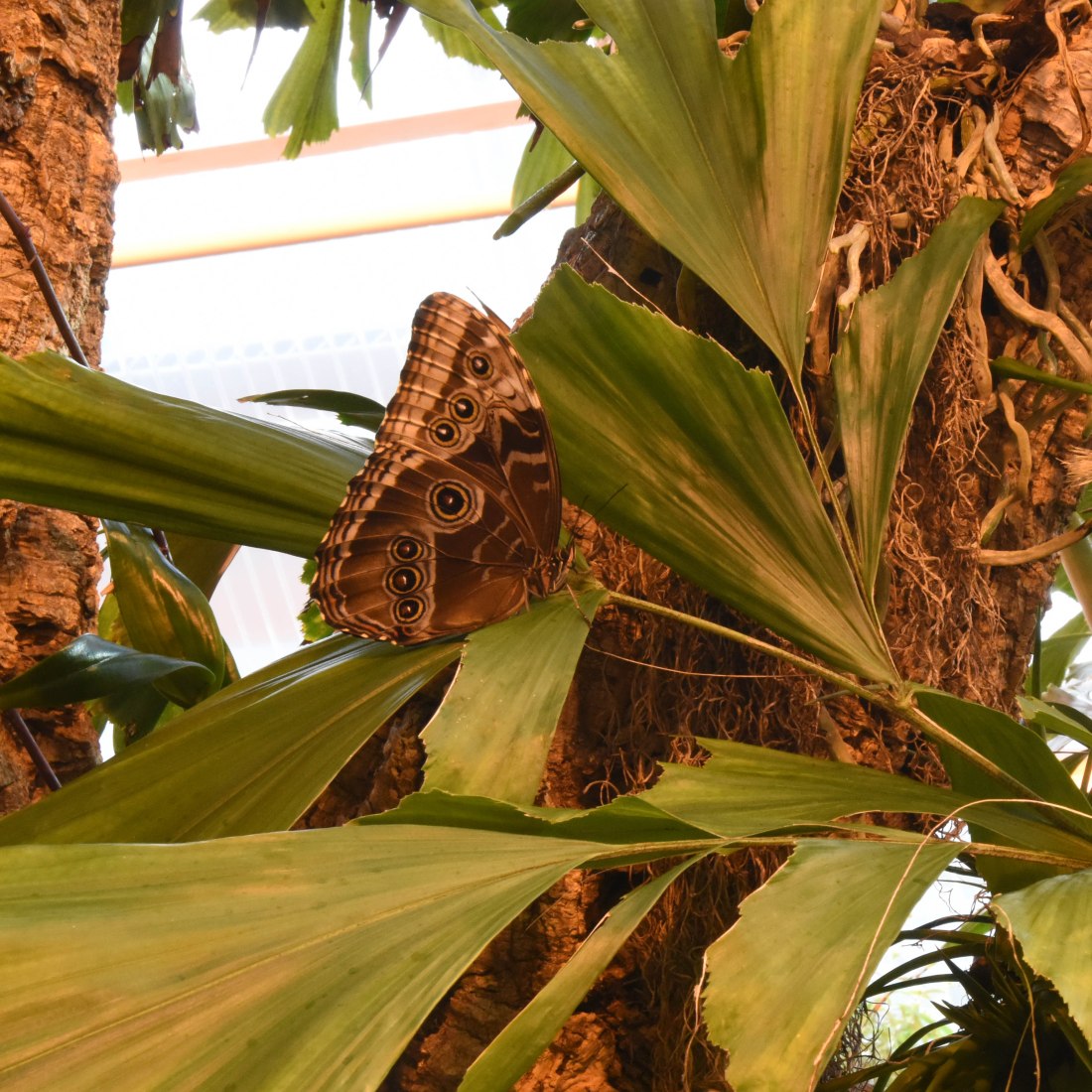 Yes, there are plenty of brightly colored butterflies – sort of an archetype, or what we, who have been trained on the colors of the Monarch, expect to see. But in butterflies — as in our own species — there is considerable variety, and all of them — as with our our own species — arrive beautiful and with purpose – including this brown one with very effective camouflage. I would wager that this beautiful brown butterfly at least remembles the Northern Pearly-eye (Enodia anthedon), native to north-central and the Northeast U.S. The Northern Pearly-eye is part of the subfamily “satyrs and wood-nymphs (Satyrinae). True or not, I’m sold, just on the subfamily, if nothing more.

My father circulates near an 1820 portrait of The Rev. Jonathan Mayhew Wainwright (a provisional Episcopal bishop in Manhattan and rector of Christ Church, Hartford CT). The portrait was painted by Larry’s 4th cousin JohnTrumbull (1756-1843). Trumbull, of Connecticut, is known as a painter of important events of the American Revolution, and is even better known as painter of work that adorns the  U.S. Capitol. This portrait is in the permanent collection of the New Britain Museum of American Art (Twitter: @NBMAA; IG: @NBMAA56) in  New Britain CT. #WhereArtMeetsLife #ReprintedWithPermission

My mother admires “West Rock, New Haven, 1849,” by  Frederic Edwin Church, who still has descendants in the area. Church was a student of Thomas Cole, considered to be the founder of the Hudson River School of painting, which romanticized the idyllic wilderness vistas of the Hudson River Valley of New York State.This work is at the New Britain Museum of American Art (Twitter: @NBMAA; IG: @NBMAA56) in New Britain CT. #WhereArtMeetsLife #ReprintedWithPermission

My father relaxes in the mid-winter sun, taking a break from perusing the permanent collection of the New Britain Museum of American Art (Twitter: @NBMAA; IG: @NBMAA56) in New Britain CT. On the other side of the windows is the rambling and delightful Walnut Hill Park, which offers the substantial Darius Miller Band Shell, named after a New Britain businessperson and recently home to a summer music series. #WhereArtMeetsLife

Of course, all these winter destinations pale when held up to our state’s two ferries that carry passengers and cars across the Connecticut River – one from Rocky Hill (our adopted hometown), the other from the Haddam area. Ferry boats of any stripe win most contests in my eyes. (I have looked, and it seems there are no other ferry crossings along the 400+-mile river, which rises near the multilingual province of Quebec and empties in Long Island Sound.)

Each year for the past several, I have been surprised to see a lone rose in bloom on the 1st of November. This year, there are a dozen on the 4th. They’re not all as glorious as these two, but they’re all pretty.
CHION WOLF / Public Radio Host of “Audacious" | I always felt at home on center stage. I did find a tape that my brother Paul and I made of a radio show that we improvised for half an hour and we would both change personalities and we were reporters and interviewers and interviewees and we would act out these different people in this radio show. And I maybe was six, seven years old.
Diana Möller-Marino ~ Acting teacher / Stage director | “I fell in love with the theater really early on. And at a kind of weirdly early age, I knew that I wanted to teach acting. I didn’t really have any notion of anything else I could or would do. I still feel that way.”
Follow 2 Cats Driving on WordPress.com
Pat Daddona's Songwriting Blog

A guide to crafting captivating music, lyrics and performances

The battles we fight - the wars we wage.

The Church of the Holy Trinity

-A Girl & Her Commander-

Life in the slow lane