My Choral Neighbors
My new backyard is dozens of acres, including the one in the photo above, stretched between my new home and the western shore of the Connecticut River. Many of these acres have been preserved as a refuge for an assortment of animals – including we humans, for whom there are nicely maintained trails. As I have recently noted elsewhere on these pages, this refuge attracts multitudes of wild animals with distinctive voices: the lyrical barred owls, a bird of prey I have tentatively identified as a peregrine falcon, boisterous frogs, arguing mallard ducks, an enormous collective community of vocal Canada geese (majestic as they take to the skies in the early morning), a broad variety of songbirds – and a pack of coyotes that yip and bark and howl in the depth of the night. And between Upper and Lower Dividend ponds is a substantial and loud run of waterfalls that once powered local commerce and industry. This symphony of nature provides me, and my two indoor cats, with regular entertainment – and serves as something of an anchor to keep our attention at the windows (still slightly open in this uncharacteristically temperate New England autumn). If you are inclined to know more about the area, you can turn here to read a column by Peter Marteka of The Hartford Courant. I’ve read it, and I will again – but right now I’m getting ready to head out into the thick of it, to take it all in firsthand.

Tragedy and Hope
The greens in this image of a rich bed of ferns under a seaside canopy remind me of a Lucinda Williams song I used in 2016 to mark the anniversary of the slaughter at Sandy Hook Elementary School. While the image itself is clearly full of life and joy, there is a deep vein of sorrow and loss running through the earth, below what we can see from where we stand. It is a confusion of tragedy and hope.

The Hurricane
Sept. 21, 1938, was the day the Hurricane of 1938 hit southern New England – including my grandparents’ home on the point that forms the main harbor of Woods Hole, Mass. (The family was safe at home in New York at the time.)

Their home was midway between Buzzards Bay (to the west) and the harbor (to the east) – at the eastern edge of what was until then a fresh water pond. The storm surge – estimated at 14 to 25 feet – filled the pond with a layer of sand and replaced the fresh water with brackish water. The storm also carried a rowboat through the windows on the western side of the house and out via the kitchen, at the eastern side of the home. The blue waves that have been painted in the diving room for the nearly 80 years since then, indicate the level the sea water reached in the house during the storm.

Which Witch?
The E.E. Dickinson Co. of Essex, Conn., dates back to 1866 – a year after the end of The Civil War. It was run by Dickinson family members until the 1980s. Three of the family members were known as E.E. Dickinson – two of them called simply “E.E. 1” and “E.E. 2.” Their company’s former plant has more recently been turned to other uses, including incubating small startup businesses, but the product that made the Dickinson family a household name – witch hazel – is still in production, elsewhere. (The astringent, made from a North American shrub, has many uses, including soothing skin irritations.)  This vintage barrel is on display in the cooperage at Mystic Seaport, the Museum of America and the Sea, in the coastal village of Mystic, Conn. 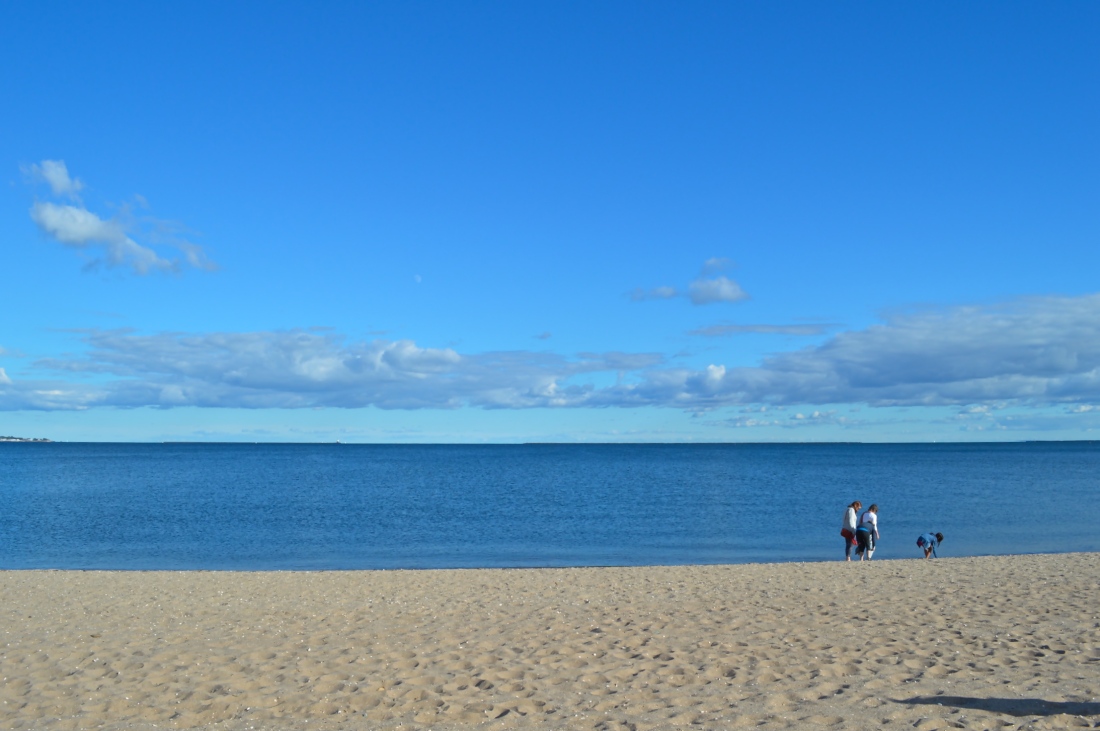 The Beach
Little is more soothing than an afternoon spending time on a quiet beach with friends and family, collecting shells and polished glass. This particular beach is in West Haven, Conn.

Each year for the past several, I have been surprised to see a lone rose in bloom on the 1st of November. This year, there are a dozen on the 4th. They’re not all as glorious as these two, but they’re all pretty.
CHION WOLF / Public Radio Host of “Audacious" | I always felt at home on center stage. I did find a tape that my brother Paul and I made of a radio show that we improvised for half an hour and we would both change personalities and we were reporters and interviewers and interviewees and we would act out these different people in this radio show. And I maybe was six, seven years old.
Diana Möller-Marino ~ Acting teacher / Stage director | “I fell in love with the theater really early on. And at a kind of weirdly early age, I knew that I wanted to teach acting. I didn’t really have any notion of anything else I could or would do. I still feel that way.”
Follow 2 Cats Driving on WordPress.com
Pat Daddona's Songwriting Blog

A guide to crafting captivating music, lyrics and performances

The battles we fight - the wars we wage.

The Church of the Holy Trinity

-A Girl & Her Commander-

Life in the slow lane